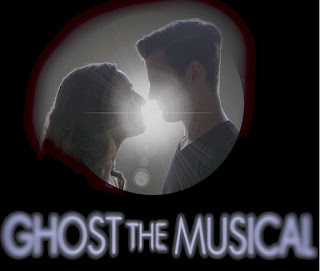 Old Log Theatre is producing a regional premiere of "Ghost: The Musical." I personally knew nothing about the musical, other than it didn't get the best reviews on Broadway. However I was quite familiar with the movie, which it is based off of, with Patrick Swayze, Demi Moore, Tony Goldwyn and Whoopi Goldberg (who won the Oscar for Best Supporting Actress). I'm a huge fan of the movie, taking a pottery class in high school shortly after seeing the movie for the first time (didn't everyone?) so I was interested to see how it was adapted for the stage.

I was excited to see to see this production for two big reasons. The first being that I had never seen a production at Old Log Theatre and I was blown away by the their venue. It was a really gorgeous space and was modernized in 2013 with state of the art lighting and sound systems. It was also the Northwest's first professional theatre. The second reason is that this was a regional premiere of the musical. Often when musicals such as this are produced, I really make an effort to try to go see them, whether I'm reviewing them or not, because I don't know when they will be produced again in the future. Sometimes it feels like it's my only chance to see it so I have to while I can.

The story of Ghost involves a couple, Sam and Molly, who are madly in love. They've just moved in together and after becoming engaged one night at dinner Sam is murdered by a mugger. Little do they know is that it was not an accidental murder as the mugger had bigger plans than simply stealing a wallet. As Sam dies, his ghost leaves his body and fails to "go to the light" and refuses to leave Molly. He soon learns that she is in grave danger but has no way of communicating with her until he meets Oda Mae Brown, a store front psychic. Together Oda and Sam must convince Molly of her impending danger before it's too late.

Before I dive into the specifics, I want to say that the talent and production value were spectacular. The set had a variety of pieces on wheels for easy scene changes, which were effortlessly choreographed with the actors. They used a variety of projections to show the audience a different locations including a hospital waiting room. I, personally, am not a fan of projections. I think if they are done sparingly and the scene doesn't rely on them they can be interesting but when it sets up an entire room, not my cup of tea. When a character would die I found the direction of this pretty cool. Another actor would stand in as a body double so the actual actor playing the character would be able to look at their body as the ghost. The synchronization between the sound booth and the actors was pretty fantastic as well. When a ghost would try to grab someone or something, a sound affect would play signalling their hand going through the object. They were almost all very well timed out. Kudos to the stage management on those cues being called.
The music in the show didn't wow me however the singing did. The actors were all on top of their game with a wide range of belts at times while also quietly tender moments as Molly (played by Mollie Fischer) cried softly over the death of her love Sam (played by Frank Moran). The performance of the night for me was from Heather Mcelrath who played the hilarious medium, Oda Mae Brown. Her wit and comedic timing were spot on the entire time including the delivery of my absolute favorite line..."You in danger, girl."

While the production value was high and the actors were skilled, at the end of the day it's still a musical about ghosts. It's one of those musicals that I think isn't really revolutionary and out of all the movies, books and TV shows that could be made into musicals, I kept asking myself "Why Ghost?" What makes this movie so special it garnered a full length musical about it?

While I may not have enjoyed the actual writing of the musical, it doesn't take away from the fact that these actors are quite talented. Ghost The Musical is playing at the Old Log Theatre in Excelsior from June 2 through September 23.
Posted by Brett at 11:03 AM